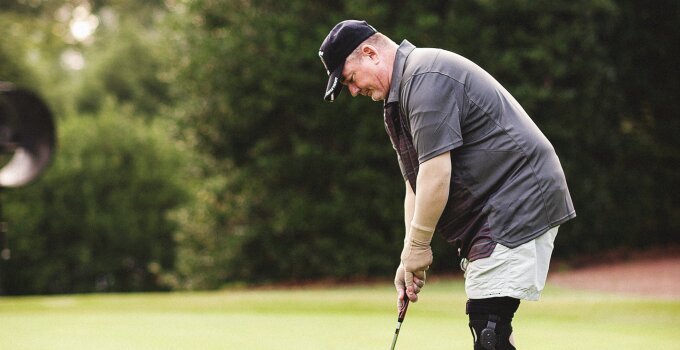 The golf grip is a strange thing. Hold the club too tightly, and you actually lose control. If your hands barely hang on, then the ball tends to what you want.

The golf grip is a metaphor for life. The less you try to steer it, the more you wind up where you need to go.

Michael Rollins is a 3 handicap. He can barely hold the golf club in his hands. He wears surgical bandages on his hands, Mizuno baseball gloves over them and has oversized grips on his clubs.

"If I start to lose my grip," he says, "I just add another layer of bandages."

Rollins, a 26-year veteran of the Air Force, suffered a traumatic brain injury in Baghdad in 2003. A mortar attack left 11 hospitalized overnight and Rollins among three who were injured severely. The after effects of the injury were devastating, in many ways debilitating.

But he can play golf.

Rollins took up the game about five years ago. He was at a golf event benefiting wounded warriors like himself when Joe Caley came upto Rollins. Caley, who, like Rollins, suffered a traumatic brain injury in Iraq in 2009, asked Rolllins if he wanted to play. Rollins did, and that's where his recovery truly began.

Rollins' injury impacts everything he does, with pain shooting through his legs, hands and arms.

The progression was slow. First it was hitting the ball. Then it was getting through an entire bucket on the driving range. Then it was to complete a single hole on the course. Then two. Then six. Then nine. Then a whole round.

"For guys like us, proving we can finish what we start is the most important thing," he says.

Each milestone encouraged the next, to the point that Rollins was asked to represent the United States in this fall's Courage Cup in the United Kingdom. The Courage Cup pits wounded veterans from the U.S. against their British counterparts. It's a change for Rollins, who admits he's often picked among the last players in a pick-up golf game at courses he frequents. Rollins wears braces on both hands, his arms and knees, as well as compression bandages. He understands that leads to some assumptions made about his ability, but that doesn't stop him -- neither does the stifling effect those golf pre-requisites have on him in the hot summer months in his native Valdosta, Ga.

"The guys that didn't survive wouldn't want us to quit," he says.

Rollins is a pay-it-forward kind of guy, using golf as a vehicle to help other wounded warriors take up the game. He reiterates the same challenge to them that he issued to himself: finish. Just finish. Take it further than you ever thought you could, would.

Michael's wife of 20 years this coming March, Peggy, explains her husband's progress with a visual.

"The Wounded Warrior Project's logo is a soldier carrying another," she explains. "Michael's no longer the warrior being carried; he's carrying others."

Peggy credits golf for helping her husband emerge from the despair his injury wrought.

Despite the confidence, focus and passion golf has given him, Michael says he is "completely dependent" on Peggy for most everything. She is his lifeline. For Peggy, then, golf and Michael's involvement with Wounded Warrior Project have been a blessing. Michael is now in WWP's independence program, where Rollins is teamed up with someone in the community who takes him out to play golf, have lunch at a restaurant or something else most people take for granted as little more than a pair of car keys away from doing. For a few short hours, Peggy can relax just the same as her husband.

That doesn't mean Michael doesn't have moments of self-doubt or pity. But Peggy says golf has made it easier to guide her husband through those tougher times. Analogizing a life situation to golf helps him see what she does, that he can work through problems. And if she can't connect with Michael, the scores of friends he has made through golf and the Wounded Warrior Project can help him relate.

That's why events like the World's Largest Golf Outing are important to the Rollins family. Michael draws a lot of energy from events like WLGO and is happy to help the event in a unique way. He has over 400 flags that he brings with him to tournaments benefiting wounded warriors, setting the mood for the civilians and warriors alike.

"The flags are more important to him than golf," Peggy says. "And golf is very important."

Michael stresses golf is the side benefit at many tournaments like this. Not only do they raise money for an important cause, but Michael can connect with fellow wounded veterans. They're a community, committing to pointing each other in the right direction for the services and things they need to improve their quality of life. Perhaps more than that, the tournaments have an uplifting, sustaining nature.

"We're super-charged up after these events," Michael says. "We're good for another six months."

When he tees it up on Aug. 11 at Bent Creek G.C. in Jacksonville, Fla., Michael will be in his comfort zone, the place where he feels best.

"Even if for just a short period," he says, "you feel like everyone else for a little while."