#BillysBirthdayWish: Billy Casper challenges you to sign up for the World's Largest Golf Outing 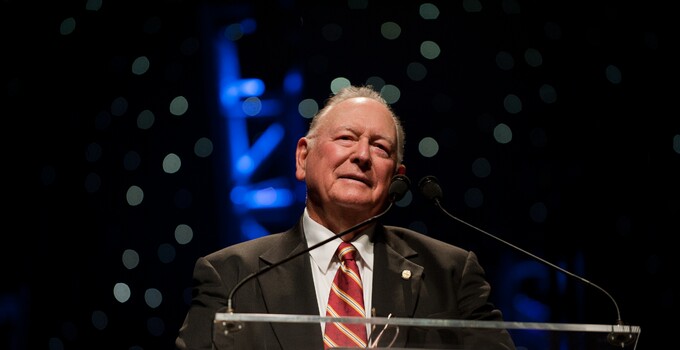 Our namesake, Mr. Billy Casper, turns 83 years old today. And he knows just the present you can get him: signing up to play in the 2014 World's Largest Golf Outing.

As you may know, Mr. Casper has a military background. After attending the University of Notre Dame on a golf scholarship, he enlisted in the U.S Navy in 1950, serving until June 1955, all the while playing on its golf team. Mr. Casper earned a mere $54.50 every two weeks (about $540 in 2014 money) before turning pro and becoming the golf legend we know today.

Mr. Casper stayed connected to the military even after leaving the service. He entertained armed forces on aircraft carriers in Asia in the same spirit Bob Hope did for so many years through the U.S.O.  Mr. Casper would hit golf balls from the ship into the sea, giving service men and women golf tips and a motivational distraction from the rigors of combat.

Needless to say, Mr. Casper is big supporter of the World's Largest Golf Outing and its beneficiary, Wounded Warrior Project. On his birthday, he has issued a challenge to anyone who will take him up on it, not only to sign up to play in the Aug. 11 event, but to raise as much money as possible for a very worthy cause.

Will you accept Mr. Casper's challenge? Sign up for the 2014 World's Largest Golf Outing, then tweet us @BillyCasperGolf with the hashtag #BillysBirthdayWish to let us know you did.

Among the Billy Casper Golf team members stepping up to accept Mr. Casper's challenge are:

Add your name to the list by accepting Mr. Casper's challenge and fulfilling #BillysBirthdayWish.

@BillyCasperGolf
RT @TheMasters: .@TigerWoods previews his fifth Champions Dinner menu. "Born and raised in Southern California, and with it playing a part…
464 Retweets