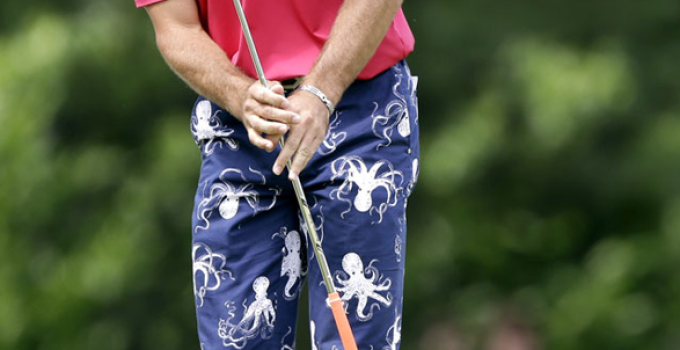 High fashion was on full display at last week’s Masters.  The ever popular color green was all the rage: from Smylie Kaufman’s pants to Danny Willett’s Sunday shirt, even the champion’s jacket is green.  And caddies weren’t the only ones wearing white; a bright pants brigade featured Rickie Fowler, Bubba Watson and Jordan Spieth, among others.  Some golfers even had fashionable golf balls, Tom Watson played his final Masters using soccer-print golf ball.

But, like in most events he plays, no one could top Billy Horschel.  His Masters wardrobe did not disappoint; on Friday he rocked some jungle-themed pants with pink leopards all over. Check them out for yourself: http://bit.ly/1VmnsWt. This wasn’t the first time he wore crazy pants; in the 2013  U.S. Open he broke the internet with navy blue, octopus-print pants: http://usat.ly/1RUz5l2 .

Horschel’s fashion sense has caught the eye of Marty Hackel, Golf Digest’s fashion guru.  Hackel has even compiled a slide show of Billy’s most amazing ensembles.  Trend setter?  Maybe.  Fashion icon?  Perhaps, but we’ll let you be the judge: http://golfdig.st/20HJzqj.

Along with John Daly, Horschel is probably best known as the dude with funky pants.  But Fowler isn’t too far behind with his all-orange Puma outfits on Sundays. Who needs a New York fashion consultant when all you have to do is turn on your TV and check out these professional golfers for ideas?

So, what do you think, fashion for par or fashion faux pas?