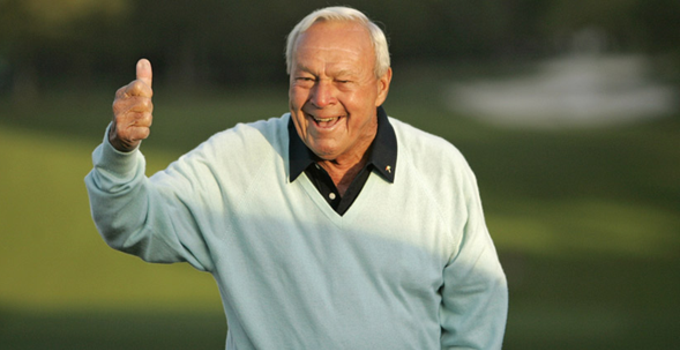 My grandfather passed away two-and-a-half years ago. My father summed up his touching eulogy with a phrase that has since shaped my days, “the best thing in life is to be remembered as a good man.”

Arnold Palmer wasn’t a good man, he was a great one. The owner of 62 PGA TOUR titles (5th all time) including seven major championships, Arnie passed away Sunday at the age of 87. With his unrefined-but-incredibly powerful swing, the man they called “the King” faced celebrity status with a humility that pointed to the fact he never lost sight of where he came from. The son of golf course superintendent, Palmer worked hard for everything golf gave him, and his “army” loved him for that.

It’s been said God told Jack Nicklaus, “You’ll be the most talented golfer ever,” then whispered in Arnold Palmer’s ear, “but they’ll love you more.”

So it seems only fitting that shortly after the news of his passing became public, everyone from Facebook friends to national journalists were sharing their Arnold Palmer stories and memories. After all, that’s what made Palmer a sports icon. Immensely talented with a golf club in his strong hands, he was even more skilled at making complete strangers feel like long-lost friends.

No other athlete did more for their sport and fit so perfectly into the times as Palmer. He brought professional golf into the family room and boosted prize money at events. He made playing in the Open Championship “a must” for Americans. He made mixing ice tea and lemonade delicious. He made millions of Americans want to pick up a golf club. He pioneered sports marketing; from Pennzoil to Rolex, if Arnold Palmer endorsed it, it had to be cool.

Golf lost its King on Sunday, but more than that, the world lost a friend. He will be dearly missed by all who knew him and remembered by those who never met him. Rest in peace Arnie and trust your stories will be shared for generations to come.