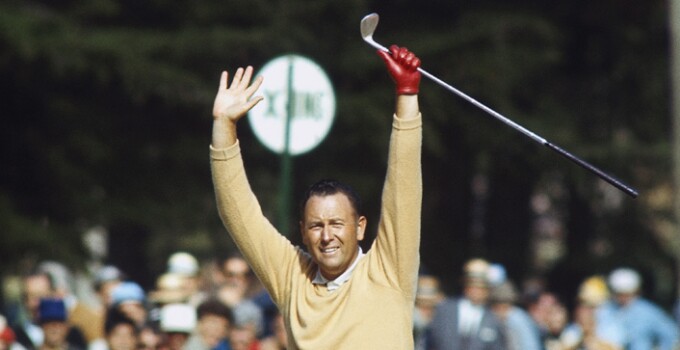 As a young boy, Billy Casper tested his putting mettle in the dark at San Diego Country Club. When he began doing it, he didn't want to return to a broken home. As his skills improved and expanded, however, it was that practice Casper believed turned him into one of the greatest putters in the history of the game.

Putting in the dark -- it's a metaphor for parenting, fatherhood. When you first start doing it, the task seems almost impossible. How can you see what you don't know? How can you read what is invisible? With time, experience and the gift of perception, however, one can learn. Casper wanted to putt perfectly, not coming up short, not striking it too hard.

Billy Casper won three major titles in a career featuring 51 PGA Tour wins, a total on topped to date by six other players. If you ask him, however, the more important numbers would be 11 and 62. Along with his wife of 62 years, Shirley, Casper raised 11 children, six of them adopted.

In the 1960s, Billy and Shirley were traveling from tour stop to tour stop in an RV with three kids. Casper wasn't motivated to win by the prospect of historical significance so much as putting food on the table.

"I was so dedicated to generating income to keep my family housed and clothed and schooled," Casper said in a 2012 Golf Digest interview. "That mattered to me. And playing good golf mattered to me. The rest of the things, like how my record stacked up against others, never made that much difference."

Casper's children told their parents later in life that it was as difficult for them as it was for him to be away from home so often.

"My older children now express to me how much it was hard for them to have their father and mother leave periodically to go out and be on tour," Casper said on Golf Channel in 2000.

But they found a way to make it work, as Casper marveled, "Yet we have some really tremendous young people."

As Casper won at a prolific rate, the future became more certain for his family. The homestead moved from California to Utah. Casper became a Mormon in 1966. The children grew up in a safe, happy household. As his children aged and the family grew, Casper invited each of them -- one at a time -- to come out on tour with him. Casper and his children were able to travel the world because of the game of golf, even if they sometimes were reluctant.

"When I went to Switzerland one time, my daughter was a nice teenager and she didn't want to go," Casper explained. "I said, 'Honey, you must go. You're going to learn something,' and I said, 'In fact, you're going to meet people that can speak seven or eight languages.'

"So we arrived in Switzerland and we got into a cab to go to the hotel. I said to the cab driver, 'How many languages can you speak?' He said, 'Well, I can speak five fluently and converse in three others.'"

Casper taught his children to value life, work hard and not waste a minute. They're the things he learned growing up in a difficult family situation, born into a family broken by the time he was 12, raised on his own, aided by golf.

It all goes back to putting in the dark. Searching for answers, Casper sought them with the trust and belief that he would be guided to them. As a father, grandfather and great-grandfather, Casper shares that wisdom gained from that first night under the moon to now.