103-year-old man makes ace, may be oldest to ever do it 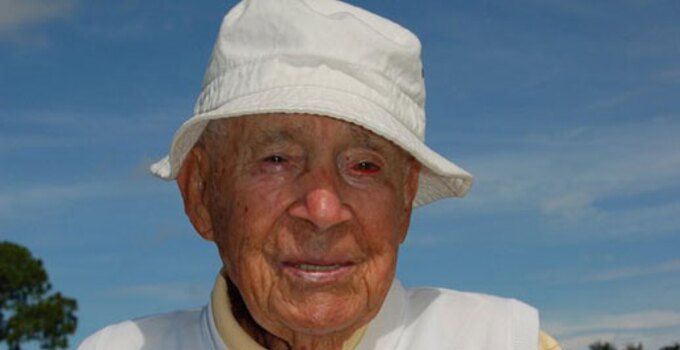 If you've never had a hole-in-one, you're probably tired of hearing from all the people who have already got their ace. But this story's a little different.

Gus Andreone is 103 years old and the oldest member of the PGA of America. On Wednesday, he made a hole-in-one -- the eighth of his life -- at Palm Aire Country Club in Sarasota, Fla. He used a driver from the green tees on the 113-yard 14th hole at the Lakes Course.

"I hit it solid and the ball then hit the ground about 30 yards from the green and kept rolling, rolling and rolling," Andreone said, according to PGA.com. "It fell into the hole, which was cut on the right middle part of the green. Miracles do happen once in a while."

Androone may well be the oldest man to have ever recorded a hole-in-one. The apparent prior record holder was Elsie McLean, who made a hole-in-one at 102 years old in 2007.  Andreone's first ace came 75 years ago in 1939. His last one before Wednesday was sometime in the 1990s, on the same course's 17th hole.

We get the feeling Andreone's just a lucky guy. In addition to the eight aces, Andreone has won the lottery three times in his long life. We'd take either.