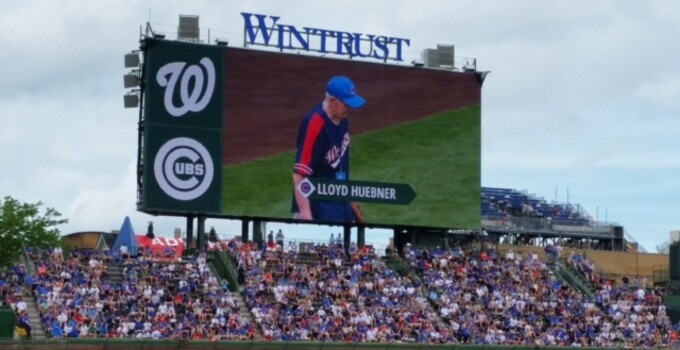 For a man born and raised in Wisconsin as a Chicago Cubs fan, just getting onto the hollowed grounds of Wrigley Field is a once-in-a-lifetime experience. Lloyd Huebner, 90, was able to experience something even more special.

Huebner, the father of 1757 Golf Club General Manager Gary Huebner, was invited to throw out the ceremonial first pitch prior to the Cubs-Nationals game on Memorial Day. Wearing a glove from 1940’s, Lloyd Huebner threw a ball right into the catcher’s glove in front of a sold out crowd. Several family members were in attendance, including Gary Huebner.

“It was an incredibly special moment,” Gary Huebner said. “He has game cards from 1947 and 1951 where he kept score during Cubs games. He would never have dreamed of getting this opportunity.”

Lloyd Huebner’s daughter who is a season ticket holder of the Cubs sent the old game cards in and the organization immediately wanted to honor him in some way.

“When they asked if he was able to come out on the field and throw a pitch, he started getting nervous whether he would throw a grounder in there,” Gary Huebner said. “He got his arm loosened up and made sure he was ready!

@BillyCasperGolf
RT @TheMasters: .@TigerWoods previews his fifth Champions Dinner menu. "Born and raised in Southern California, and with it playing a part…
464 Retweets