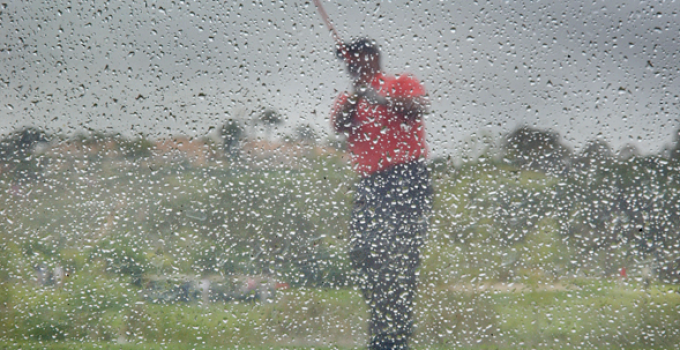 Every once in a while golfers on the PGA TOUR have to tee it up in some adverse conditions.  A little bit of rain, high winds and even cold.   Then there are the times when golf gets halted altogether.  This past weekend at the Zurich Classic was a classic (sorry, couldn’t help it) example of Mother Nature showing off her true powers.  Heavy rains soaked the course, shortening the event to 54 holes and washing out any chances of a Billy Horschel comeback (which would have really helped my fantasy golf team).

So in honor of the heavy rains that plagued TPC Louisiana, here is a list of the top 5 times weather interrupted the PGA TOUR.  When it rains, it pours … and Boo Weekley snores.

Surprise, surprise.  The weather was the story at the 2010 Zurich Classic, with a deluge of rain drenching TPC Louisiana.  But what was most impressive that day was the bolt of lightning that obliterated a tree on live TV.  Check it out below; let’s just hope Lee Trevino wasn’t holding up a 1 iron.

Arizona and hail.  Two words that really don’t belong in the same sentence, except for when you’re talking about the 2000 Williams World Challenge.  Lots of hail suspended play at Grayhawk Golf Club.  The course was unplayable, that is, unless your name is Phil Mickelson.  Leave it to lefty to finish out his round by chipping in on a green covered in hail.

It rained so much prior to and during the Viking Classic that it didn’t just delay the event, it cancelled it altogether.  Bunkers were washed out, feet would sink into the ground like quicksand, heck if Vikings themselves would have a tough time traversing the land.  It was the 10th time in the event’s 40-year history that heavy rains played a major factor in playability.

Trump National Doral’s Blue Monster became the blue monster during the 2011 Cadillac Championship.  Heavy rains and high winds caused a lengthy delay and lots of destruction.  A camera (that was later blow into the pond) caught the dismantling of a broadcast tower in the distance on live TV.  High winds huffed and puffed and blew it down like it was made of toothpicks.  They even reported microbursts at Doral …. MICROBURSTS!

It seems 2011 was a popular year for bad weather.  Snow and Arizona. Again, two words that have no business being in the same sentence.  First, snow caused play to be delayed (guys were warming up on the range in the snow).  Next, a hail storm popped up during play, causing yet another suspension.  Luke Donald won the event that year; it’s been said the former World No. 1 was so cool, he had ice running through his veins.  At that event, he probably did.

It was perhaps the finest round of golf ever played in inclimate weather.  When the Bishop tried to sneak in a quick nine before bad weather hit, who knew it would turn out to be a record-setting performance.  With one of Bushwood Country Club’s finest caddies on the bag, the Bishop poured in putts as it poured down around him.  With a chance to break the club record and sound advice from Carl Spackler, he put safety aside and nearly set the club’s lowest mark.  Alas, when his putt on the final hole skimmed by, mother nature put a shocking end to his round.