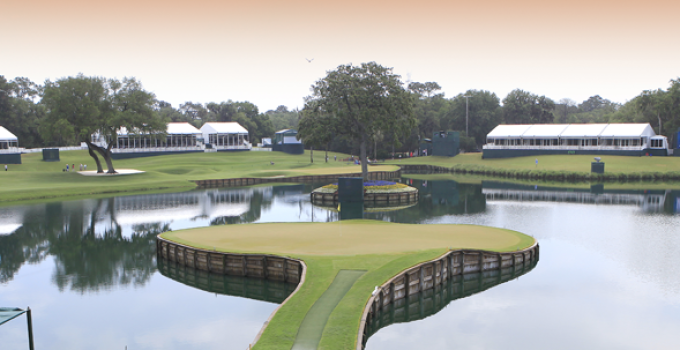 Getting to an island is never easy. Sometimes we travel by plane, other times by boat. Then there are the times when we have to get there by pitching wedge. Pitching wedge? Of course, it’s the preferred mode of transportation when traveling to the infamous 17th hole on the Stadium Course at TPC Sawgrass.

Touching down safely on golf’s most infamous par 3 is no easy feat. For example, during the 2007 PLAYERS Championship 50 golf balls landed in the water in one round alone! Designed by legendary architect Pete Dye in 1981, the lake surrounding the island green swallows up more than 100,000 golf balls per year, some of which are generously donated by professionals.

Anything can happen there, from the good to the bad to the ugly. First the good: Rickie Fowler birdied the 17th hole three times in one day, eventually winning the PLAYRES in playoff.  Next the bad: Sergio Garcia arrived at the 17th tee tied for the lead but two balls in the water and the subsequent quadruple bogey dropped him out of contention.  Finally the ugly: Bob Tway holds the PGA TOUR record for worst score with a  12 after four balls found a watery grave; and don’t get us started on Angelo Spagnolo a.k.a. “The World’s Worst Avid Golf,” he recorded a 66 just on that hole!

Dye designed the course to favor no particular player; it’s laid out with the intention of not having two holes face the same direction. A balance of par-3s, 4s and 5s, as well as wonderful viewing areas for fans, make it one of the TOUR’s most exciting venues.  Then there is the 17th whose construction took an unexpected turn.  The hole was originally supposed to have a small pond, but it was Dye’s wife Alice who suggested they make it a pure island green … and like any good husband, he listened to his wife.  One year later the PLAYERS came home to the Stadium course, a venue that has produced some of golf’s greatest moments.  How do the players like the design?  Most players were critical of the layout and remain so even to this day; but Pete Dye wouldn’t have it any other way.

Have you had a chance to play the 17th at TPC Sawgrass?  Hit the green in one try?  Maybe one day I’ll try my luck and see if I can make it across safely.