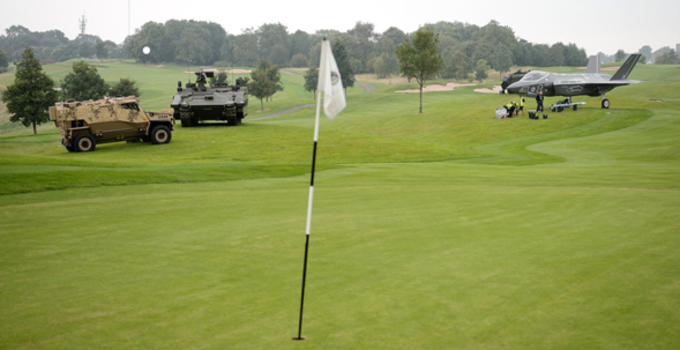 Taking the day yesterday to honor the brave men and women who have made the ultimate sacrifice while serving in the U.S. military, it got us thinking here at the BCDN. Firstly, it made us reflect on how lucky we are to live in a country where men and women are willing to lay down their lives to serve and protect. Second, it got us thinking about golf’s deep relationship with the military.

Some of golf’s greatest champions also proudly put on a uniform to serve America in time of war. Bobby Jones (seen on the left) served in the Air Force during World War II. He reached the rank of lieutenant colonel and landed in Normandy on D-Day plus 1 (June 7, 1944) where he spent two months with front-line divisions as a prisoner-of-war interrogator. Ben Hogan also served in the Air Force as a utility pilot stationed in Fort Worth, TX. Lloyd Mangrum, winner of the 1946 U.S. Open (the first one played after WWII), enlisted in the Army and was awarded two Purple Hearts; he was wounded in The Battle of the Bulge, a brutal assault resulting in the highest number of U.S. casualties for any one battle in World War II.

Other notable golfers to serve included Sam Snead, Lee Trevino (who credits his time in the Marines for turning him into such a great golfer), Arnold Palmer and Billy Hurely III.

To all those who have and are serving in the U.S. military, the BCDN team and everyone at Billy Casper Golf would like to say thank you from the bottom of our hearts. You are what make this country great.