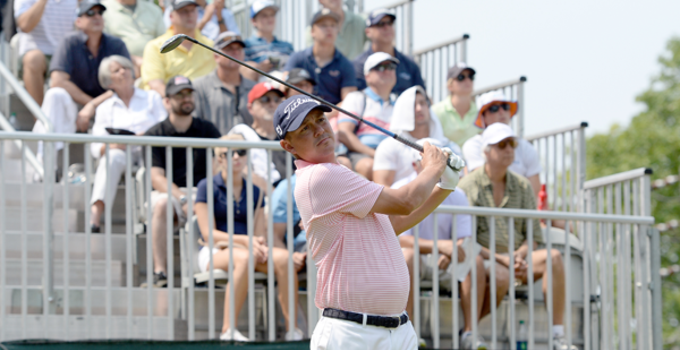 It’s been a while since you’ve heard this name: Jason Dufner.  Duf-man had everything going for him not too long ago.  He won the 2013 PGA Championship, grabbed the media spotlight and even had a phrase coined after him (remember Duffnering? Check out the pic just below).

But much like the sport itself, things can change in an instant.  Suddenly golf got tough.  Injured started to rear their ugly head.  Off-the-course issues consumed him.  Things weren’t so cheerful for the cheerless looking Dufner.

But enter the CareerBuilder Challenge, or should we say, the “Career Booster Challenge Accepted.”  A trimmed-down Dufner recaptured his form and turned in an amazing performance on a gorgeous track.  Rounds of 64-65-64-70 at PGA West TPC Stadium Course sent him into a playoff with David Lingmerth.

While the putt he drained to win that playoff was sweet, the shot he’ll remember for a while was on the previous hole.  His tee shot ended up in an improbably spot on the island green 17th … and like all good tour pros, he got up and down from the rocks.   (see video below)

Rocky Road, Rock ‘N Roll, On the Rocks … whatever you want to call it, it was dang impressive.

And it just goes to show, your golf game can be there one day and gone the next.  Just never give up, you never know what kind of lie life with throw at you and the opportuneness that can come from it.