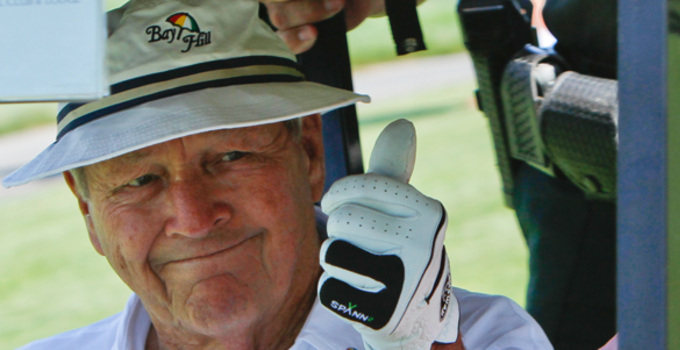 While Jason Day might have dominated the field last week at Bay Hill, Arnold Palmer dominated the headlines.  In an announcement that brought a tear to many a golf fan’s eye, the King informed Augusta National he won’t be available to hit The Masters’ ceremonial tee shot.

Now 86, Palmer said last Tuesday he can no longer swing a club well enough to participate; he does however intend to be on hand as an honorary starter.

On this Monday after the Arnold Palmer Invitation, we reflect on The King.  Here’s our collection of top 5 Arnold Palmer moments on and off the course.

Arnold Palmer captured his first green jacket, and America’s hearts, in 1958.  The birth place of “Arnie’s Army,” his victory at The Masters that year cemented Palmer as one of the game’s brightest stars and helped usher in a new era of golf.  Palmer was also responsible for bringing golf into the houses of millions of Americans nationwide … thank you TV!

We can thank Arnold Palmer for making The Open Championship cool again.  Before Ben Hogan won the British in 1953, few American golfers would travel to play in the Open (after all, they didn’t have airliners like we do today).  On the advice of business partner Mark McCormack, Palmer made the journey and, even though he didn’t win the championship, his victories in the 1961 and 1962 Open showed many Americans it was well worth the effort to make the trip.  Nowadays golfers are begging for the chance to tee it up in the Open.  Thanks Arnie!

Ice tea is good.  Lemonade is better.  Mix them together?  Pure greatness.

Perhaps more important than Palmer’s accomplishments on the course is his contributions to society off the course.  While millions of golf fans will remember Palmer for his legendary career, tens of millions of families will remember him for improving their children’s’ lives at the Arnold Palmer Hospital for Children.  Serving nearly 20 counties in Central Florida, the hospital ranks among the best in the nation for child care.  On his website, Palmer says “Making a positive change in the life of a child is one of the most significat things you can do.”

Perhaps one of Arnold’s most defining victories came at the 1960 U.S. Open at Cherry Hills.  Winning The Masters is one thing … winning your nation’s championship is another.  The story will go down as one of the greatest in golf: Palmer authored the biggest comeback in U.S. Open history against two of the game’s biggest names in Ben Hogan and Jack Nicklaus.