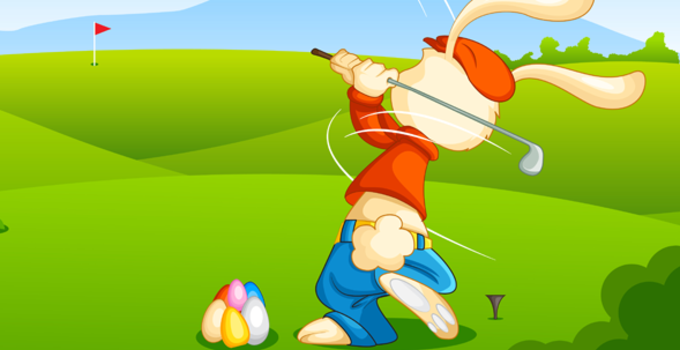 Here’s a fun game to play with your buddies that will surely keep every hole interesting.  It’s called Rabbit and it’s played similarly to the Zookeeper game we discussed a couple weeks ago.  Except in this format, there’s only one animal you need to catch: that “wasically wabbit.”

Fun for up to four players, the object of the game is to snag and hold onto the rabbit for as long as possible.  Capturing the rabbit is simple: make the lowest score on the hole (no ties) and it’s yours.  Holding onto the rabbit is the tricky part!  Playing partners can set the rabbit “free” by making a lower score than the current holder.  Then, the rabbit is totally up for grabs again.

Important to note, the rabbit must be “free” for it to be captured.  So if I am currently holding the rabbit and you beat me on the hole, you don’t automatically get the rabbit. You have to win it on the next hole.  To determine the winner, tally up the amount of holes you held the rabbit for, and the player with the highest total claims the carrot!

There are some side bets you can throw down to make it even more exciting.  For example, the player who holds the rabbit after the ninth and 18th hole can win a side pot.

Now get out there – it’s rabbit season – and enjoy a fun round with your buddies playing Rabbit.