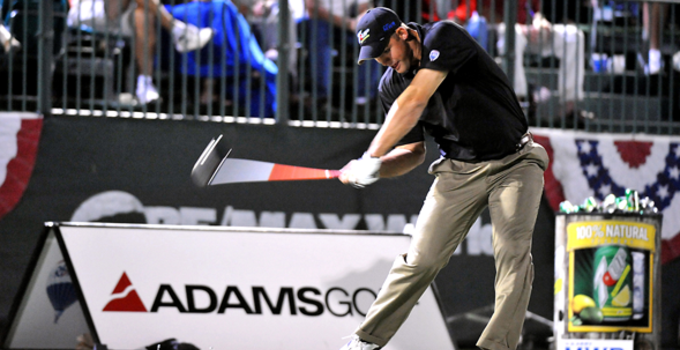 It’s not easy to hit a golf ball, especially off the tee box.  When learning to play, hitting a golf ball a long ways can be rather difficult.

The top five bombers on the PGA TOUR – including J.B. Holmes, Dustin Johnson and Bubba Watson – average between 308 to 313 yards off the tee this year.  Last year Johnson averaged 318 yards through 75 rounds; two years ago Watson led the charge with 314 yards through 76 rounds.

What has brought on this boom in distance?  Some say it’s the technology, others point to golfers working out and focusing on physical fitness.  Increased flexibility through yoga is also a popular option to improve driving distance.

While the PGA TOUR’s longest hitters are quite impressive, they’ve got nothing on the world long drive champions. Some competitors can hit over 400 yards! What’s crazy is some of the long drivers aren’t professional athletes; past winners even include a chiropractor (he probably knows the secret to keeping his back and flexibility in check!).

The United States National Long Drive Championships have been around since the 1970s. Some legendary names and Hall of Famers include Evan “Big Cat” Williams (the pioneer of long drive and national champion in 1976 and 1977). Jason “Golfzilla” Zuback was the first person to break the 400-yard barrier in competition, bombing it 412 yards in 1997 (a record that stood until 2008). Michael “Hoop” Hooper won three consecutive Senior Division titles starting in 1996.