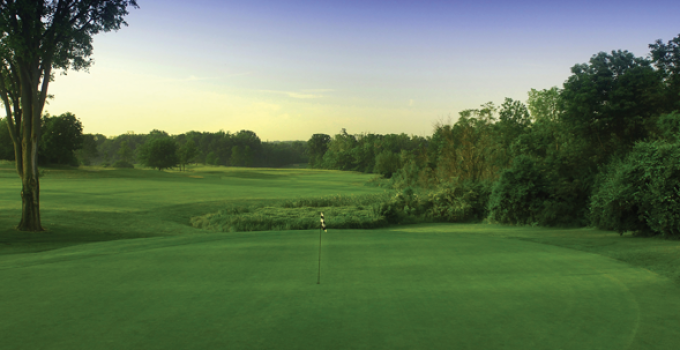 I’ve been working on my putting lately – always a good agenda item for May – and spending time on the practice green at Glenview Golf Course, part of the City of Cincinnati Recreation Commission’s portfolio of courses and a 10-minute drive from my house.

Glenview has long had a rich tradition. It was a member of Golf Digest’s 75 Best Public Courses list before the golf boom of the 1990s hit, and it had the distinction of hosting a USGA national championship, the 1987 U.S. Amateur Public Links.

But Glenview has also been notable as one of the places where African-American golfers have always seemed comfortable coming to play. Along with another Cincinnati Rec course, venerable Avon Fields (the oldest muni west of the Alleghenies) and a handful of other courses around the area, Glenview was one of those places that seems to belong to everyone, regardless of identity or station in life, from beginners all the way up to Tiger Woods, who put on a clinic at the course in 1999.

Tony Yates (left) was part of the effort to bring Tiger to town. Yates has quite a sporting history himself – he was the starting point guard on the University of Cincinnati’s two NCAA championship basketball teams and later became the head coach of the Bearcats. But golf is at least as big a part of his sports passion, and the Junior Golf Academy he runs through his foundation opens the door to the game to 300 kids every summer.

So it was a pleasant coincidence to run into Tony about a week back as I was leaving Glenview. We talked for a while, and he had just stopped by to help one of his former players with his putting. I asked who that was. “Richie Adams” was his reply. Despite having covered high school sports for the Cincinnati Enquirer for 25 years, I’m a little too young to have seen Richie play in person, but from somewhere out of the depths of my brain, it slowly connected. “Oh yeah, he played for Colerain High School, didn’t he?” I asked. And then another synapse fired, and I remembered, “And then he played at the University of Illinois, when you were the assistant coach there under Lou Henson.” Tony smiled, as I was right on both counts.

Richie now seriously has the golf bug, as I saw him out there again the next time I went back to putt. (He’s hard to miss at 6-foot-9.) I struck up a conversation, telling him about running into Coach Yates, and we had a great talk for the next half-hour. Richie is still one of the top 30 scorers in the history of Illinois’ program, and talked about playing against Magic Johnson, my favorite player of all-time. He’s also got a daughter who he says has outdone his athletic exploits, Rachael Adams, who twice was an All-American in volleyball at Texas and is currently a middle blocker on Team USA as they are in the run-up to this summer’s Olympics.

Richie also introduced me to his playing partner from earlier in the day, Michael Whitehead, who graduated from the same high school as I did, Princeton, the only difference being that Michael had twice won the state championship in the high jump in Ohio’s biggest school classification, and I had not.

Michael, too, has the serious golf bug, and we had a great time reminiscing. My home room teacher at Princeton, Franklin Shands, was one of the great gentlemen you could ever meet and a true molder of men. He was also Whitehead’s track coach. It put a smile on both of our faces to remember a man like Coach Shands.

Yet, to me, the most remarkable meeting and the reason that pushed me over the edge in writing this post, was still ahead.

I went back to Glenview Friday night. After about a half-hour of putting and the sun starting to get low, a figure quietly appeared across the green, wearing a cardigan sweater and dress shoes. When he got close enough, we start making small talk and it grew into a conversation.

Turned out he's 80-years-old and his name is Eddie Russell. He quietly let me know he was a pretty accomplished player at one point. I started off by asking him if he played against Jimmy Woods, the great, lost, almost mythological Cincinnati golfing legend. Jimmy was in all likelihood the greatest golfer the city ever produced, and he could beat you playing left-handed or right-handed. But he never got his tour shot because of discrimination. Eddie talked about all the miraculous shots he saw Woods play through the years, including beating him once on the last hole by hitting a 4-iron off a severe downhill lie, having it hit the rise in front of the green just right to take the steam off of it, and then having it roll forward into the jar for the win.

Eddie grew up in Atlanta and says his dad was a railroad guy (as Jimmy Woods was), and was a heckuva player. He also did some work around Eastlake Golf Club, where Eddie says Bobby Jones treated his dad and he pretty well. They would be allowed to go off on the back nine early in the morning before the members went off the front, and that's where Eddie learned to play.

Eddie later played on a tour called the United Golf Association, which was akin to what the Negro Leagues were to baseball (also unofficially known as "the Chitlin Circuit.") He played against greats like Charlie Sifford, Jim Thorpe, Lee Elder, Chi-Chi Rodriguez and Pete Brown, the first African-American to win a PGA Tour event. Eddie said the best round of his career was a 62, and that came against Chi-Chi.

Eddie was also well-acquainted from his UGA days with a player-turned-writer I know named Herschel Caldwell, who publishes "Minority Golfer Magazine," so we chatted about him. Herschel was on a writer’s trip I went on down on the Robert Trent Jones Golf Trail, which was emotional for Herschel, as he was a native Alabaman who had the game off-limits to himself in the small town where he grew up.

Eddie’s work life involved employment with Jim Beam, which had a big distillery here in Cincinnati right off of I-75, but he says they mainly wanted him to just play golf for the company.

It was enthralling talking to someone who had seen and lived such a colorful history. One of my great regrets about golf in my lifetime is that a game that offers the possibility of such pure and rewarding experiences to any player also has such a lengthy history of denying opportunities and accessibility based on race, class, sex and ethnicity. To run into someone like Eddie, who didn’t let it stop him from loving the game, at a place with the history that Glenview has, was a bit of an affirmation that the future of golf will be better than its past.

That’s what every one of us believes every time we tee it up, which is a beautiful thing.

Carey Hoffman is a special guest contributor to the Billy Casper Digital Network.  He was the Golf Writer for the Cincinnati Enquirer from 1999 to 2011 and is a graduate from the University of Cincinnati.