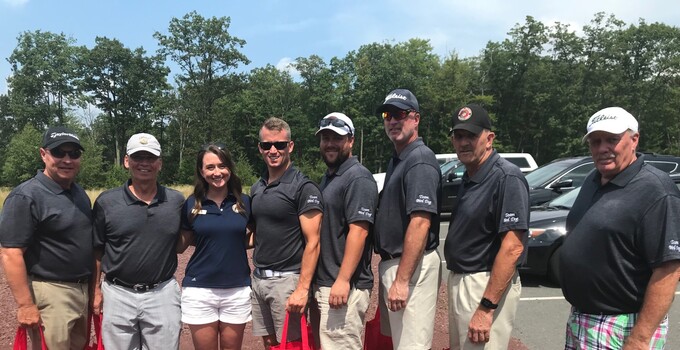 We all have stories to share about WHY we support the World’s Largest Golf Outing (WLGO) and ultimately Fisher House Foundation.

Just two weeks shy of kicking off the 2019 World’s Largest Golf Outing, our Marketing team had the opportunity to interview the highest fundraising team in WLGO history. Team Birddog, scheduled to play at Jack frost National on August 5th, has done an incredible job spreading the word and growing their fundraising initiatives over the years.

“A family's love is good medicine” rings true for many of us, but particularly for Team Birddog.

Christy R. Lapp (Team Birddog Captain) was intrigued by the World’s Largest Golf Outing (WLGO) back in 2016 when he first heard about the upcoming event on the Golf Channel. “When I saw it was for Fisher House, I got excited - we’re a military family,” said Lapp, who has two sons and a daughter-in-law in the Marine Corps, and a brother who’s a former Marine.

Four years ago, Lapp and four of his friends joined together to form “Team Birddog”– named after the O-1 Bird Dog Military Aircraft – and there has been no going back since.

Having played on Team Birddog since 2016, former Marine Ed Zander said, “We push hard to make WLGO the success it is. It does our hearts good, because we know where the money’s going – to the men and women who work so hard and serve so proudly to protect our freedoms.”

Team Birddog now raises money year-round through initiatives including a cornfield dinner and cash dinner, where the team raffles off money to a select amount of people throughout the night – all catered by Christy’s family business, C.R. Lapp’s Family Restaurant.

“The folks at Jack Frost National make us feel so welcome,” Lapp said. “It’s not about us, it’s about those military men and women. It’s a phenomenal event and always a good time. Whether it is $1,000 or $20,000, I don’t foresee us ever stopping to raise money for our military families.”

“Team Birdog has been a supporter of WLGO for many years. They go above and beyond in their fundraising events. They host several large dinners throughout the year to raise so much money for WLGO. Most of the group has served our country or have children that have served so this event is very near and dear to their hearts…they are true Patriots!” – Keith De Vos, Jack Frost National

Team Birddog will tee it up alongside more than 3,500 golfers nationwide on Monday, August 5th as a part of the World’s Largest Golf Outing. WLGO is an annual national golf fundraiser conceived by Peter Hill, chief executive officer, Billy Casper Golf. Since its inception in 2011, more than 62,000 men, women, juniors and seniors have played in 34 states to raise $4.1 million for military charities. To find your nearest participating course visit or to donate visit www.worldslargestgolfouting.com.