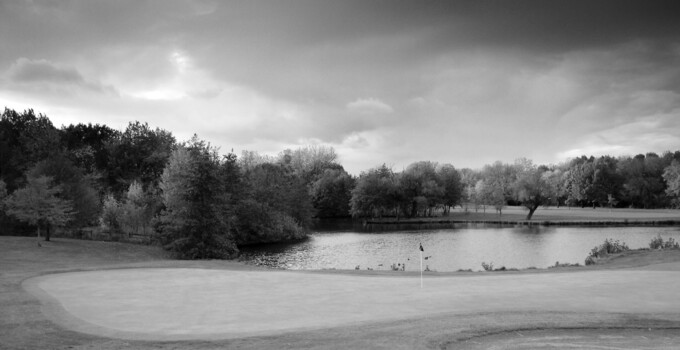 With a month left before the first day of spring, and courses across the country closed due to cold weather and snow, many golfers are itching to pick up their clubs. Kurt Uniek, Player Development Manager & Golf Instructor at Billy Casper Golf-managed George Dunne National has put together a series of winter instruction articles. The first in this three-part series focuses on winter putting practice.

Let’s talk putting.  More specifically, indoor putting.  And, more specifically than that, how to improve your putting while there is a foot of snow outside and the high temperature reading is six degrees.

There are TWO factors in putting: speed (the amount of energy you impart on the ball) and line (the direction at which the ball leaves the face of the putter).  Now, unless you have a puttable carpet or putting mat at home, we will not be talking about speed in this article.  Let’s save the distance control work for the spring and summer when we are able to practice on real greens.

So, during the winter as you’re watching TV, I want you to have your putter nearby and some loose change.  First, though, I want to ask you a question I ask all my students: in putting, which is more important, putter face or putter path?  If you said putter face, bravo, there may be hope for you yet.  All of you that answered putter path, listen up.  85% of a putt’s initial starting direction is influenced by the putter face, while the path influences only 15%.  Quite a big difference, right?  That is why we are going to work on line, or putter face control during our off-season.  Most of my students don’t have the time to put in two to three practice putting sessions a week and to be honest with you, who does?  A few practice putts on the green before your round is usually the extent of most of their putting practice.  But, during the winter, this is the time where we have a chance to actually ingrain some positive habits.

Keep that loose change ready, we’ll get to that in a minute.  Getting the ball rolling over our intended line is, in my opinion, the most important factor in being a good putter.  With that being said, there are a couple of basic setup positions that I like my students to get into.  In the first one, I want your eyes over the inside edge of the ball at address.  This is important because optically this give us the best view of the start line of the putt.  For instance, if your eyes were two to three inches inside the ball, they would pick up the start line from there, but the ball is actually two to three inches over, so now you have created confusion in your brain, and your brain is not going to function efficiently if it is confused.  Simple, right?

The second fundamental is your grip.  There are literally a hundred different ways to hold your putter.  I ask my students to find a grip that is comfortable and one that brings the putter face back into the ball squarely on a routine basis.  You can experiment by putting a flat edge on the ground (a ruler, book, box, etc.) and seeing which grip will bring that putter face back into it squarely.

Put two or three balls down on the carpet. Next, take two paces (approximately six feet) and place some coins down (pennies, nickels, dimes etc.). Place as many coins as you have balls.  Make sure your eyes are over the inside edge of the ball.  Pick a coin for your first putt and roll your ball over it.  The coin should be roughly six feet away from you, and I want you to hit the putt with enough energy to have the ball roll another six to eight feet past the coin you’re aiming at. The coin should be at the midway point of the putt.  Hit your second putt to the second coin and repeat until you’ve aimed at every coin.

Change up your starting spot, and change your coin placement to avoid wear spots. Take it from me on this one: if you can get to the point where you are consistently hitting your target at six feet, or even getting close, that is going to lead to better results on the green for 2018.  Why? Well, in my opinion, putting is simply rolling your ball over your intended line with enough energy to get it to the hole.  Most students don’t get their putts started on their intended line, so the only way they make putts is by accident.  If you can get your ball rolling where your eyes are looking, the probability of the ball finishing closer to the hole, or actually going in, increases dramatically.

Couple this off-season work on putter face control with some early season work on controlling distance and watch out for a 2018 season on the greens like you’ve never seen.

Kurt has been working in the golf industry for over 20 years. Along the way he has worked at both private and public courses as an Assistant Professional, Head Professional, Director of Golf, and Instructor.  Kurt is a local south suburbanite, having gone to High School at Oak Forest, Junior College at Moraine Valley CC, and finishing up at Southern Illinois University at Carbondale where he earned his degree in Psychology.

"The teaching style that I have cultivated during my time around the game can be described as fundamentally driven with an emphasis on giving the student the knowledge and understanding of the HOW and WHY with regards to their own swing. The goal of hitting the ball better with the result being lower scores  and having more fun are the obvious end game, however, I want my students to know enough about their own swing so that they can self- correct while on the golf course.  To me that is the sign of a good teacher/student relationship.  So come on out and schedule a lesson and let’s have some fun and make this the best golfing year you’ve ever had."