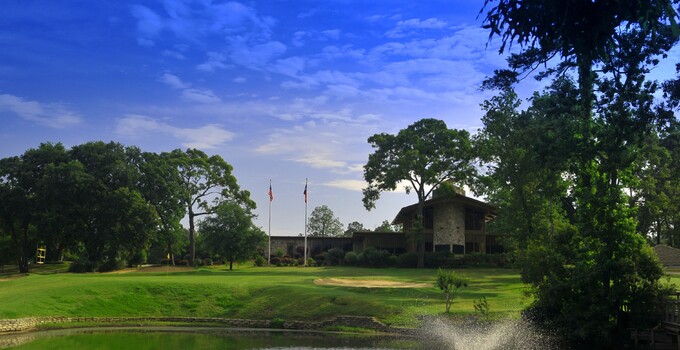 How many times can you say you've walked the same footsteps as Ben Hogan? Odds are, not many -- that is, unless you've played The Village Golf Club in Texas.

The facility boasts 27 holes of golf crafted from the imagination of two men -- the original 18-hole course designed by then-30-year-old Jay Riviere and a nine-hole course designed by Jack Miller and opened in 1969. One of the nines is known as Winged Foot, named for the New York club where Riviere worked as an assistant pro over the legendary Claude Harmon. The Thunderbird nine completes the original par-72 course. The Rolling Hills nine is Miller's handiwork.

Both men were shaped their courses using the same landscape, producing three nines that challenge players of every skill level.

The Village may not be long, but what it lacks in length it demands in accuracy. Tree-lined fairways make longer hitters think twice about hitting driver. Better players tend to think their way around the course, precisely the point of the game. The ball has to be in the right place off the tee to have a chance of scoring well, but isn't suffocating to the higher-handicap player must feel playing Sahalee or Harbour Town, the Pete Dye icon that opened the same year Miller put the finishing touches on his nine holes at The Village.

Back when The Village opened, its location, Conroe, felt more like a distant neighbor to Houston. Its population of 5,000 couldn't connect easily to the city as Interstate 45 was still to be built, shortening the 43-mile journey between towns. Today, Conroe is home to almost 50,000 people, more of an extension of a sprawling, massive city than an escape from it. The town has seen its population get younger and more diverse.

For almost 40 years, the country-club model worked for Panorama. However, after in the wake of the post-9/11 recession, the club began to have trouble standing on its own. Inside Conroe is the town of Panorama Village, once a retirement community, whose city council began discussing the purchase late in '01, taking almost four years to complete.

It was the city's first order of business to convert Panorama Country Club into The Village Golf Club, trading one word in the town name for another.  The city chose Billy Casper Golf to manage the course under its new identity.

The council voted to invest nearly $2 million in the property, converting greens to Bermudagrass and redoing all of the bunkers. The course was also opened in a different way. As part of the renovation, some 200-300 trees were removed from the property. Add that to the 1,200 trees removed by the club in the 1990s and the course offers more breathing room than it did a half-century ago.

Despite the removal of so many trees, lumber plays an important role in shaping The Village’s two best holes.

On the par-4 ninth hole, a giant oak tree in the right-center of the fairway forces a player to look left just to have a look at the green with their second shot. Even if the tee shot is in the clear, the second shot is no bargain. With trees continuing on the right and a water hazard short and left of the green, the 412-yard hole (from the tips) can make or break your first nine.

The Riviere course – one of some 22 he designed in the Houston area in his career – ends with an approach shot somewhat reminiscent of the one Ben Hogan faced in the 1950 U.S. Open at Merion with a 1-iron in hand. After hitting a tee shot at the 386-yard finisher, the player faces an intimidating second shot over water and in plain view of anyone in the clubhouse. The audience and the circumstance may not quite match the U.S. Open, but the blood will be pumping faster for sure.

The newly renovated clubhouse is also a stunner, with new hardwood floors and a completely redone golf shop. The banquet space, which comfortably holds 350 people, and meeting areas have been modernized.

As for the care of the courses, a new superintendent has recently been hired.

The relationship between a golf course and its surrounding community is always vital, but is especially so with The Village and Conroe. The partnership is a strong one.