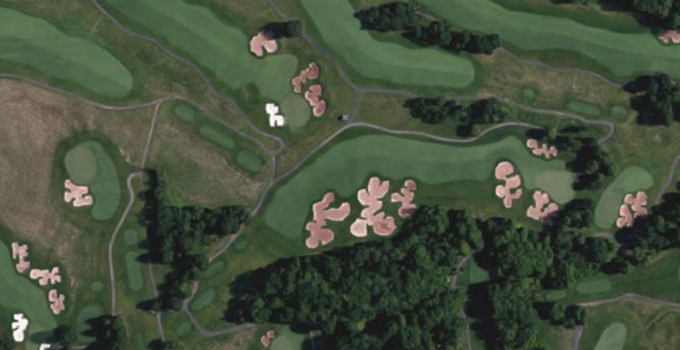 Royce Brook Golf Club is visually striking.  Just one look at the Google Earth images of the award-winning layout and golfers know they’re in for a treat.

The first thing that jumps off the screen is the bunkers.  Lining the fairways and guarding the greens, Royce Brook’s sand traps were designed in a manner that would make the great Alister Mackenzie smile.  After all, it was Mackenzie who said, “No hole is a good hole unless it has one or more hazards in the direct line of the hole.”

If that’s the case, Royce Brook has 36 great ones designed by renowned architect Steve Smyers.

The private, rugged West Course is a Top 20 layout in New Jersey according to Golf Digest.  Awarded 3.9 stars (out of five) on GolfAdvisor, the par-72, 7,158-yard layout takes members on a journey through rolling terrain filled with tall fescue grass, pods of native trees and foliage, and loads and loads of dramatic bunkers.

Enjoy some photos below of this impressive property, and if you get the chance, take a peek at the course on Google Earth.  Trust me, you won’t be disappointed!

And don’t miss your chance to play one of New Jersey’s best!  Visit the website (www.roycebrook.com) or call the pro shop at 908.904.0499 to make your tee time today.