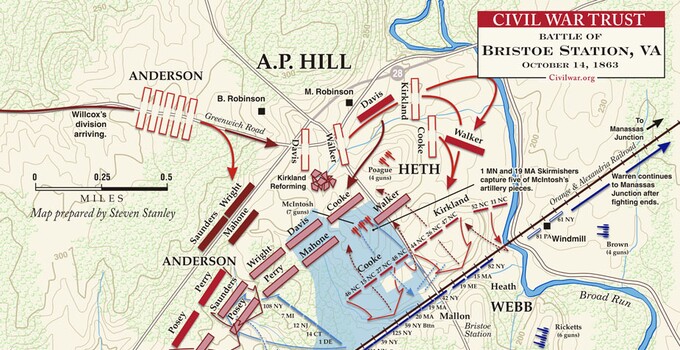 Golf is a battle between you and nature, and sometimes someone else.

However, at Broad Run Golf Course in Bristow, Va., there once was an epic different type of battle. Several holes of Broad Run sit on a Civil War battleground.

The Battle of Bristoe Station happened on Oct. 14, 1863, marking the first major fight between the armies of Northern Virginia and Potomac following the Union victory at Gettysburg that July.

Tactical errors by Confederacy general Robert E. Lee and A.P. Hill led to the killing of Carnot Posey by Union forces concealed by a railroad embankment.

Ultimately, while the Union won the battle, there were broader implications for the remainder of the war. Confederate voices wondered if Hill had been promoted to general too quickly following the death of Stonewall Jackson in May of that year, while Union general George G. Meade (whose name is on a military base in Maryland which once boasted a 36-hole golf facility) was criticized for not being aggressive enough in his attack.

Some 135 years after the Battle of Bristoe Station, Broad Run Golf Course opened to the public. Unlike at the aforementioned Gettysburg, there have been no reports of ghost sightings on the 9-hole course.