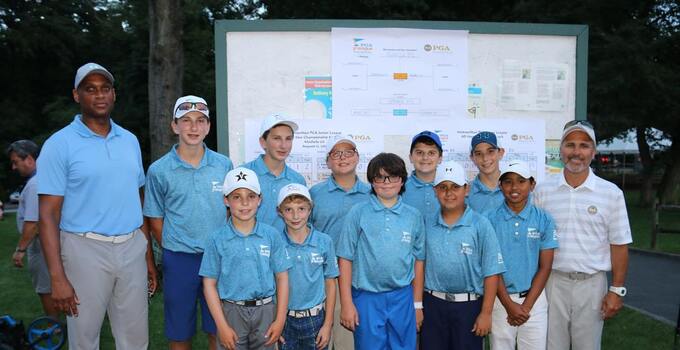 Each Regional competition is comprised of four Section Champions from each of the 12 regions across the country. Representing the Metropolitan PGA, the Suffolk County All-Stars will compete against teams from New Jersey, Philadelphia and Central New York in a round robin on Sept. 15 – 16 at LedgeRock Golf Club in Mohnton, Pa. If they win, they will advance to the PGA Jr. League Championship at Grayhawk Golf Club in Scottsdale, Ariz., on Nov. 16 – 19.

Four of the 10 members of the Suffolk County All-Star team are from Pine Ridge Golf Club, a Billy Casper Golf-managed facility in Coram, N.Y. Led by PGA Professionals Rich Jones and Sean Sanders, the juniors at Pine Ridge receive a high level of instruction and have had a great deal of success (and fun!) this season.

Pine Ridge has two PGA Jr. League teams, Bombers 1 and Bombers 2. The Pine Ridge Bombers 2 team won their division and the Long Island Championship this year. They will compete in the Met Section Championship at Nassau Country Club on Aug. 29.

Pine Ridge’s junior golfers had the opportunity to meet some of their favorite professional golfers during a trip to the U.S. Open at Shinnecock Hills Golf Club in Southampton, N.Y., earlier this summer. Other season highlights include the in-house Parent-Junior event and, of course, the post-match milkshakes.