Peaking too early? The strange story of Ed Oliver 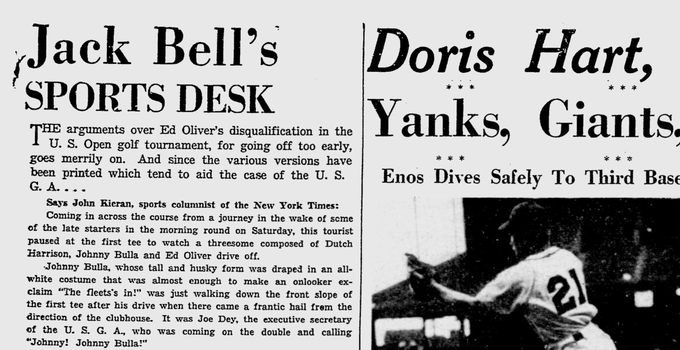 You've probably heard of pro golfers being disqualified from a tournament for showing up late for a tee time. How about for teeing off too early?

Oliver began his golf career as so many greats did, as a caddie, on the same property that bears his name when it was known as Wilmington Country Club.

Those caddying days propelled him into a PGA Tour career that saw him win eight time in the 1940s and 50s. Oliver's biggest win came in the 1941 Western Open, but was the winner the year prior in the old Bing Crosby Pro-Am, also known simply as the Crosby Clambake.

Oliver was a three-time Ryder Cup team member as well, with a record of 3-2-0.

The Wilmington native has the rare distinction of finishing runner-up in three of the four modern majors, notching second-place finishes in the Masters (1953), U.S. Open (1952) and PGA Championship (1946).

Oliver could have won the 1940 U.S. Open, were it not for one of the more bizarre disqualifications in major-championship history.

While the USGA contemplated the penalty for the two threesomes, they were told by a member of the USGA championship committee that they could play the round under protest. They did.

Oliver finished tied with Gene Sarazen and Lawson Little, but was disqualified. Little won the 18-hole playoff for his only major championship.

A week later, the USGA issued a statement saying three members had been aware of Oliver teeing off early and had disqualified him before he teed off in the final round.

So why did Oliver and five others start play early? According to the USGA's history, it was because a thunderstorm was brewing, threatening play.