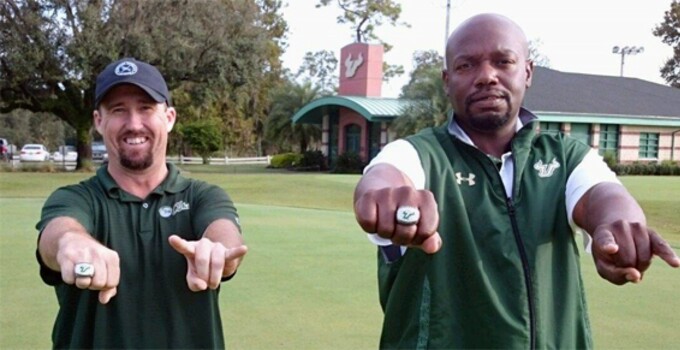 “James and Josh have been responsible for our facility and The Claw,” said Steve Bradley, USF Men’s Head Golf Coach.  “The course is in the best shape it’s ever been and is great practice for the team.”

At the Conference Championship the Bulls built a 16-shot lead through two rounds at Black Diamond Ranch in Lecanto, FL.  They capped off the final round in style, posting a 27-under-par 837 total to finish 13-shots clear of runner-up Southern Methodist University.  Bulls’ senior Ryan Fricker won the individual title, firing rounds of 67-67-71 (11-under par) to finish two strokes ahead of Bryson Dechambeau, the reigning U.S. Amateur and NCAA Division I champion.

“Josh and James are truly a part of the team,” says Charlie Green, General Manager of The Claw at USF.  “They continue to keep this amazing facility in excellent condition which helped the team practice for and win their conference championship.”

Following their impressive conference victory, the Bulls won the NCAA Regional at The Course at Yale, topping 13 other teams with a 14-under 826.  In the NCAA Division I Championship, the Bulls placed 6th in stroke play to earn a spot in match play.  They advanced to the Quarterfinals before falling to the University of Georgia.