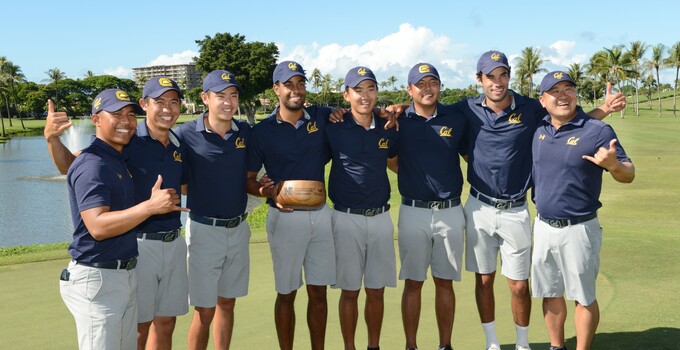 Sebastian Crampton stated about his round, “I was hitting it really well off the tee this weekend – the fairways on the Royal (Ka’anapali) Course are wide open and my drives were consistent.  My wedges were hot and I made two eagles which really helped – I’m really happy about that.”  Crampton continued, “This is my fourth year at this event in Hawaii and although it’s a competition this weekend, we got to enjoy some beach time and the atmosphere in Hawaii helps to loosen you up, so I wasn’t feeling really stressed going into it.”  As for his team Crampton noted, “It was great to have the team all back this weekend after a few injuries and people being out – we were bound to do well this weekend if we believed in ourselves and we did.”

One of Crampton’s eagles came on the par 4, 7th hole, an uphill dogleg right, playing 325 yards today with a slight crosswind.  Crampton hit a cut drive aiming to the back of the pin and “executed it perfectly to eight or nine feet left of the hole,” he said.  Crampton would go on to make the downhill left to right putt and score a 2 for the hole.

California teammate Collin Morikawa is ranked 2nd in the World Amateur Golf Ranking and is no stranger to the leaderboard at Ka’anapali.  Morikawa carded a 63 today to take 3rd place in the individual event.  Morikawa made nine birdies and just one bogey today to finish the tournament at 199 (-14).

Head Coach Walter Chun commented about the event and California’s first time win at Ka’anapali, “This event has a different feel to it than some, everyone involved takes pride in running the event and it has this atmosphere that makes us feel good to be a part of it and put on a good show – Ka’anapali is special - the staff, the volunteers, the community, they treat you like a family guest, like a guest in their home and that’s what really sets this event apart from the rest.”  Chun added, “As for the team, I really defer to the players and their work they’ve done leading up to this event – they all know what to do and they just have to remember to be patient if the wind kicks up or they miss a few putts – but they also need to stay aggressive when they can. They’re all smart guys and even today, they got off to a steady, slow start, but stayed patient and really put the birdies in action on the back nine and dug in – they played great.”

Oklahoma’s Quade Cummins shot 67-66-65-198 (-15) and came in second place overall. Cummins is a sophomore at OU and commented about today, “There were at least 20 people in it going into it today and I knew that someone was going to make a bunch of birdies and I didn’t want to get lapped by the field, so just being aggressive on the holes I needed to be aggressive on and the other holes, being disciplined on the tougher holes when I needed to.”  When asked about a key hole Cummins said, “This is going to sound weird but I hit it out of bounds on #9 so I had to re-tee and I still made par on the hole, so it was a like an eagle (because of the penalties) – that kind of jump started me for the back nine – I shot 29 on the back and I thought I could be in contention but there were still a few players behind me and obviously Sebastian played really great today.”

Oklahoma teammate Riley Casey came in 4th overall and stated about his mindset going into today’s final round, “I thought maybe I could get Top 5 or Top 10 and have a good mind set going into the off-season.”  Casey added, “On #8 I made a really a great par-save and that helped me to stay the course and just keep going from there.” Casey birdied his next two holes.  He continued, “The greens were in great shape, if you put yourself in a good spot on the green, you had a chance for birdie, as evidence by the scores today.”

University of North Florida’s Head Golf Coach, Scott Schroeder commented on the day, “Our guys that had a tough time yesterday really came through today for us, with Michael Mattiace being 6-under and Jordan Batchelor at 4-under.”  Schroeder added, “Andrew (Alligood, 5th overall) got off to a good start, he made two birdies on the first six holes and then as he would say, played ‘just boring golf’ and parred the next 11 holes.  After nine holes today, we were right there with California, but they just played the back nine really well.”  Schroeder stated, “It was a good week for us, we beat a bunch of great schools and it was a good finish to the season – that second round really showed us what we’re capable of.”