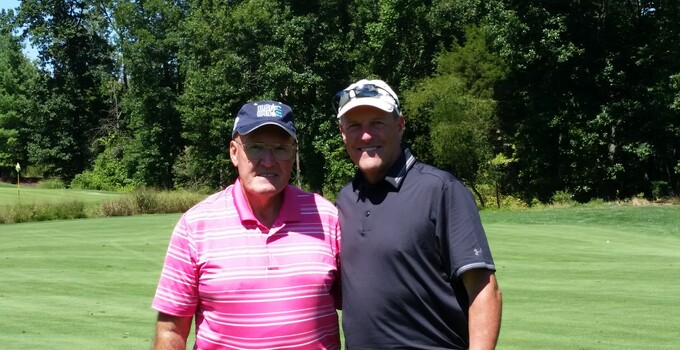 My father, Ralph Goodrich, was the person who exposed me to the game of golf at a very young age. He was an avid golfer, as was his father, my grandfather. We played every chance we could while I was growing up, which included countless times at our club, Hidden Creek, in Reston, VA. My father would watch me play in local tournaments. He was my instructor and my mentor, working on not only my swing, but also on how to play the game, from both a strategy and character standpoint. Hidden Creek is also the place I landed my first job at the age of 14, working in the bag room and carts. By the time I was a senior in high school, I was opening and closing the golf shop and knew I wanted to do this as a career.  I loved working at a golf course, loved the business and it was my passion for a career, just like it was my father’s true passion.

I went to Ferris State University, home of the first Professional Golf Management Program in the country, which was a program set up by the PGA to train future PGA Professionals on the business side of the golf industry. Shortly thereafter, I started working for Billy Casper Golf, which exposed me to people, opportunities, and situations beyond my wildest dreams as a young kid growing up. Shortly after I began working for BCG, my father and I had a falling out, and did not talk for 10 years.

As BCG continued to find incredible success as an organization and my career at the company flourished, I had an empty feeling, an empty space in my heart and a desire to share some of the things I was experiencing with my father. It was February of 2014, and the commercials for the upcoming Masters were on. I can still hear Jim Nantz, saying, “A tradition unlike any other, the Masters." I reached out to my father and reconciled, and decided to invite him to Augusta to watch the Masters. Of course we had watched it on TV together every year growing up, and talked about how great it would be to be there one day, but he had never been. He was speechless.

I flew into Charlotte, NC, where my father was living and drove to Augusta. The entire time I was bursting with excitement to share this with him, knowing what a treat it would be. I had the opportunity to attend the Masters more than 15 times, played the course twice and knew just the plan to get him totally exposed to every hole, every shot and as many magical moments as Augusta National holds each April. We played golf at Champions Retreat the Wednesday before the tournament, had a great dinner and woke the following morning at 6 a.m. to go to the first round of the Masters. Yes, this was a pilgrimage, one of the highest on a golfer’s scale. To be making it with my father, who had introduced me to the game which had brought me so much enjoyment and success was another dimension for me.

It was a glorious Thursday, sunny and 75 degrees. We walked the back nine before any players made it to the 10th tee so we could put out our chairs on the 12th tee, see the spectacle of Amen Corner, the undulations of 14 green, the second shot on 15 to that tiny sloped island of a green, the serenity of 16 green where the pin would be tucked behind the left bunker on Sunday and, of course, the elevation change on 18 as golfers make the final climb to their last hole. We then followed groups on the front nine and grabbed a couple of pimento cheese sandwiches and took it all in. My father could not have been happier, he was in complete amazement. He asked me how much more walking we were going to do and I realized it was not even noon and we had walked the entire course, which was probably taking its toll on my 70-year-old father who was still recovering from a knee replacement. So, I decided it was time to see an old friend under the Oak Tree.

We walked up to the clubhouse and I spotted him sitting at a table just on the other side of the ropes at the clubhouse. Billy recognized me and came over to the rope to say hello. It was there I introduced my father to Mr. Billy Casper. You see, my father was a huge fan of Arnold Palmer, but his father’s favorite golfer was Billy Casper. My father and grandfather would follow the tournaments and watch on television every chance they could get, just like my dad and I did every weekend.

Billy could not have been more gracious and my father could not have been more appreciative. The two of them spoke for almost 20 minutes about past tournaments, families, and some life experiences. If you knew Billy, you knew there were always going to be a few good stories. We all talked about the last appearance Billy and I had done together, in Florida. Well, it was his appearance, I was just there to carry his golf clubs and make sure he caught his flight.

We knew it was time to part ways, as Billy had some other friends who had arrived at the table. Billy shook my father’s hand and said, “Ralph, it was a pleasure to meet you, you have raised a very fine young man and we truly appreciate everything he has done for the company.” Wow, mic drop. I barely got a “Thank you, Billy” out of my mouth. I looked at my dad as we walked over to the first tee and tears were streaming down his face. We both gave one another a big hug and I said, “It really has been a great day hasn’t it?” My dad responded, “The best, the absolute best…”

I will never forget that trip, yes, because it was The Masters, yes, because my father had a chance to meet Billy Casper, and yes, because I cannot think of a better place to be with your father or vice versa the first half of April.

Next up, Pebble Beach…