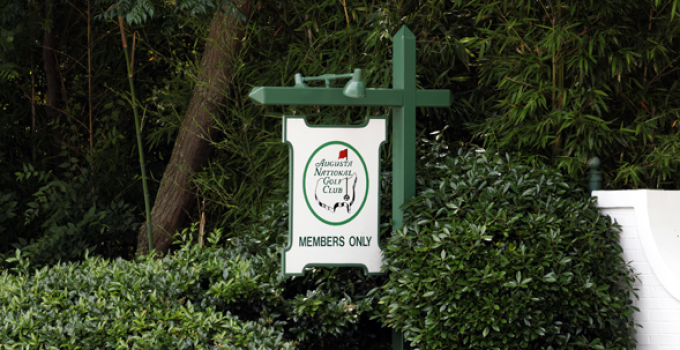 A few years ago I was lucky enough to attend The Masters with my dad.  Walking around Augusta National on Wednesday, I was like a kid in a candy shop.  My father and I walked every hole from tee to green.  The fairways were pure, the greens looked like a fine sheet of grass-linen draped over lumps and bumps, and the bunkers were more defined than a Webster’s dictionary.  Every hole was majestic; you could almost feel Bobby Jones and Alister MacKensize guiding you around the property, taking you on a journey up and down the east-Georgia landscape.

Speaking of up and down, TV doesn’t do Augusta National justice.  The place is a certified ski-slope.  The drop from the 10th tee to the green is enormous!  Walking down the hill to make our way to Amen Corner was a trek … getting back up the slope was arduous.

We called it a day in the late afternoon following the Par-3 Tournament and headed back to our car.  Before departing we chatted about our favorite hole.  It’s hard to pick, but there was one that stuck out.  While the 12th hole is iconic and the 13th is perhaps the best par-5 in golf (not to mention the site where I passed my kidney stone) … it was the 10th hole that stole the show.

It’s a marvel of course design; at 495-yards “Camellia” is one of the longest four-pars on the course.  The large fairway bunker is breathtaking and the green is a work of art.  It's been the site of some of the most memorable moments in tournament history.  And even though it plays straight downhill helping the golfers kill some of the yardage, it’s historically the hardest hole during Masters’ week.  Just ask Rory ... too soon?

Yep, 10 takes the cake for me.  But what about you?  What’s your favorite hole at Augusta National?  Hit us up on Facebook or Twitter and let us know.